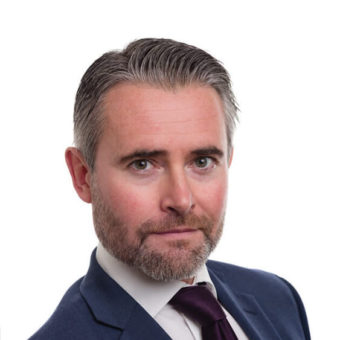 Kyle Sutherland is Corporate Local Practice Group Head in the Isle of Man. He is qualified to advise on both the laws of the BVI and Isle of Man, and specialises in a broad range of corporate and commercial disciplines in those jurisdictions, ranging from joint venture work, restructurings, mergers and acquisitions, asset finance transactions, private placement and listing work.

Kyle qualified as an Isle of Man advocate in 2003, and subsequently spent a number of years working for firms in Liverpool and Manchester. Prior to re-joining Appleby in 2010, Kyle relocated to the British Virgin Islands and spent several years working in the corporate department of a leading British Virgin Islands law firm, where he was involved in a wide spectrum of cross-border transactions, and was lead lawyer on a number of high-profile deals.

Kyle is recognised as a ‘Leading Individual’ in the Legal 500 UK 2021 edition and has been described as being “proactive and pragmatic” and “sensible and pragmatic”. Clients told Legal 500 that “Kyle Sutherland is one of our valued and trusted advisers. He always provides advice efficiently and pragmatically, and works very well with our team.”

Chambers UK 2021 ranks Kyle in the Corporate & Finance practice area, noting that sources appreciate he is “approachable and sensible in his advice”. Chambers UK 2021 sources also cited that he is “very professional and attentive”.

Some examples of recent transactions include advising:

Appleby has advised the joint lead managers, including among others, HSBC and Santander on the Isle ...

Appleby acted as Isle of Man counsel to CarTrawler, a leading B2B provider of car rental and mobilit...

COVID-19 – Charity AGM restrictions in the Isle of Man

The COVID-19 pandemic and associated restrictions place unprecedented difficulties on Isle of Man re...

Striking off a company

Methods of winding up a solvent Isle of Man company

The Advantages of Listing High Yield Bonds in the Channel Islands

The Advantages of Listing Securities in the Channel Islands